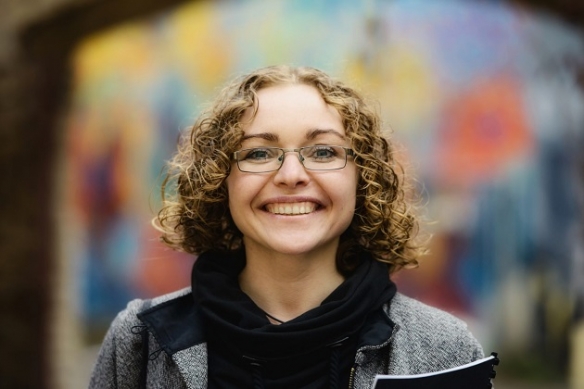 Congratulations to Egidija Medekšaitė– the winner of the George Butterworth prize 2017!

The prize is awarded annually to the composer of an outstanding new work created through one of Sound and Music’s Artist Development programmes, which include Embedded, Portfolio and Adopt a Composer.

Egidija was selected for ‘Megh Malhar’ – a piece composed on her Embedded project with the Quatuor Bozzini which is “about the weaving of raindrops or dew into one fragile and transparent pattern.” Read Egidija’s blog on The Sampler about her work, “Weaving New Patterns”

Listen to the piece below:

Egidija Medekšaitė (b. 1979) studied composition with Prof. Rytis Mažulis at the Lithuanian Academy of Music and Theatre, graduating in 2007. In 2003 she took part in the Programme of Composition and Music Technology in Tampere (Finland). In 2004 she attended master classes in Istebna (Poland), Dundaga (Latvia) and the Acanthes Composition Workshop in Metz (France). In 2006 she studied at the Stuttgart Academy of Music with Marco Stroppa and Caspar J. Walter. In 2016 she received the degree of Doctor of Philosophy in Composition at Durham University (UK) with Prof. Richard Rinjvos and Dr Sam Hayden. The composer participates in various interdisciplinary art projects, writes music for dance performances, drama theatre and movies.

Read our Q+A with Egidija

How does it feel to be an award winner?

“It seems still like a dream. I am very grateful for this professional recognition. The annual George Butterworth Prize means a lot to me. It gives me confidence, and further belief in what I am doing.”

Tell us some more about the piece.

“Megh Malhar was supported by Sound and Music’s ‘Embedded’ programme, in collaboration with the Canadian string quartet Quatuor Bozzini. This program provided excellent conditions for my ideas to crystallise, which are connected to the textile pattern. For me as a composer working with the transformation from textile patterns into music, it is not easy to find a single, specific solution, which connects the two artistic domains. In order to achieve the final version of the piece, I had to run a long music/textile marathon. For this piece, I was determined to use double notes, or double stops for strings, but at first I could not sort out in a which way. Because of this, each day I developed a new sketch, generating new ideas and performing the same musical material in different tempos, etc.

I would like to thank my mentors Christopher Fox (UK) and Christopher Butterfield (Canada), and the members of Quatuor Bozzini for their patience, understanding, hard work, and for keeping me going in the right direction.”

Tell us a little more about the title – what does Megh Malhar mean?

“The word ‘Megh’ in Sanskrit means ‘cloud’ and Megh Malhar is an Indian classical raga the aim of which is to produce the effect of an approaching thunderstorm and rain. Megh Malhar is also believed to have the power of influencing clouds in time of drought.My intention was to use this raga in such a way that it might resemble the illusion of sparkling dew, in which each droplet reflects the microscopic world of the rain. Each string player performs various trills in an extremely slow tempo in order to maintain this fragile sense of sound. For me, this music is about the weaving of raindrops or dew into one fragile and transparent pattern.”

What’s in store next?

“At the moment I am composing music for the Lithuanian drama theatre. It is a love / life story, which combines theatre, acting, and contemporary dance based on a story written by the German writer Hermann Sudermann “Jonas and Erdme”.

About The George Butterworth Prize:

The George Butterworth prize is a £1500 grant, which is awarded annually to the composer of an outstanding new work created through one of Sound and Music’semerging composer programmes, which include Embedded, Portfolio and Adopt a Composer.

The George Butterworth Memorial Fund was established in 1921 by the composer’s family together with initial trustees including Ralph Vaughan Williams and George Dyson. It was funded by income from the estate of the composer himself who was tragically killed on the Somme during the First World War, having been awarded the Military Cross.

To find out more about previous recipients of the award here

This prize is awarded in partnership with Making Music.