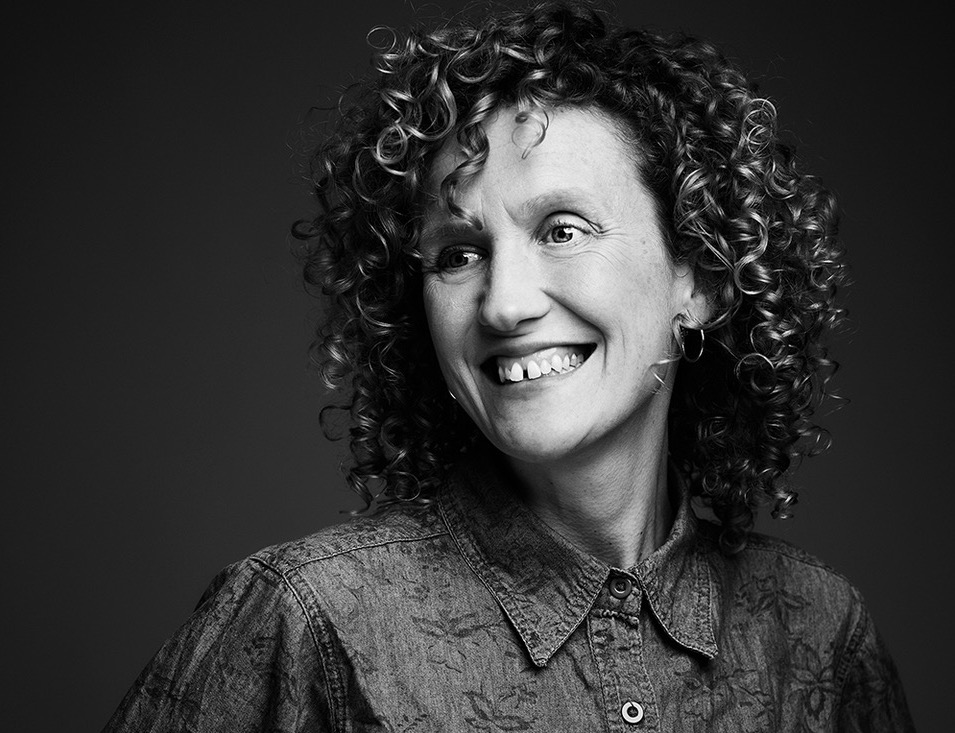 Mella Faye is a musician, actor and director and a composer on Sound and Music’s New Voices 2019 programme. In 2016, Mella set up her company, Pecho Mama, to begin creating work that fused her two creative obsessions; theatre and music. Through this platform, Mella creates progressive, music driven performance that boldly experiments with form, and digs deep into the human condition.

In 2019 Pecho Mama began producing a radical reinvention of the Oedipus myth, telling Jocasta’s story and fusing London’s domestic grit with a searing live Electronica score. For her New Voices work, Mella has focused on releasing the album OEDIPUS, from the show, giving particular focus to herself as a musician and composer. We caught up with Mella ahead of the release of new single ‘Back Against the Wall’ to learn a little more about her work.

I’m interested in the relationship between music and theatre in your work. Your main project is a gig-theatre work and the album has come from the show. Firstly, where did you come across the term gig-theatre and did you define your work with this term yourself or was it placed into that category?

It’s a pretty good definition of what we do. When we first trialed our work as a company in front of an audience, we asked them the question, do you think this is a gig, or do you think this is theatre? And the response was definitely that it is theatre. The audience deeply engage with the narrative. But the heart of the company is an electronica band, the music drives the performance and the band are live on stage whilst the drama unfolds around us.

Would you call the album a soundtrack or does the music have an independent life to the show?

The songs are the soundtrack and are integral to the stage show. But my New Voices mission, being a part of this cohort, was to give the music a platform and an independent life to the show.  I think there will be alt, electronica, prog rock, synth fans out there that would get something from it without necessarily seeing or being interested in theatre.

Do you intend to tour the music without the theatre show? If yes what would that performance look like? How does your performance change as a theatre practitioner to musician on stage, if it does at all?

I think that this album does have a life inside of music venues, with music audiences, but that it carries some of the theatricality from the theatre show. I’d also like to bring into the live music tour the audience relationship we have so that when the audience comes to see the show as a music gig there’s that same level of intense concentration, engagement, that there is at a theatre show. So it’s a concert rather than a Friday night gig in that sense.  We haven’t yet had a chance to actually tour to live audiences, so until we do we’re not really going to know what it’s going to look and feel like.

What are the challenges of making work across artistic disciplines and where would you like to see yourself identified creatively in the future?

I think that working across disciplines is not a challenge, that’s the joyful part. I think that the real challenge is that there isn’t enough time to nurture our development as a band in more than one industry. It’s having that space and time to build relationships. We’ve been building relationships within the theatre industry for the last couple of years and it’s very slow and needs so much time and investment. And in order to build relationships within the music industry as well, this is what I find the real challenge. The pandemic has actually granted me more time, there is an opportunity now to go ‘ok, I can’t do much with the theatre relationships at the moment because everything’s on pause so there is an opportunity here to say hello to the music industry and see if we can launch ourselves there’.

You compose with your two band mates. What is that creative relationship like, how does the song-writing happen?

It’s very organic, we sort of mess around, we play, improvise, we start with an idea which may be a melody or lyric or drum groove or synth line. And then, if we all start vibing off it, it’s likely that one of us will start recording it and then we’ll listen back and if we all still like it we’ll start to mould it into a shape. Some songs have gone through multiple versions and others are almost exactly as they popped out first time.

So it’s a really collaborative process. Have you always written like this or is it a new experience?

It’s quite new. When I used to compose — I had a ten piece band many years ago —   I would always come with a fully formed song from start to finish. That was partly challenged by the fact that we are making the theatre show. When I am developing the show in tandem with composing the music, I can’t be defined about what the lyrics are going to be, we can only say ‘this song is the one where they are having sex’ or ‘this is the song where they feel like they’ve lost everything’. So it starts with a feeling quite often. And because that’s all we have to begin then it’s a very easy way to collaborate because we’re just trying to access a feeling together.

Do you find this produces different music to before?

Definitely and in a way it’s fulfilled a part of me that always wanted to write the things that I was listening to as a teenager. I was really into Led Zeppelin and Pink Floyd and Fleetwood Mac, big bands. Bands seemed to improvise together more back then, there was less of this 3 mins produced radio thing, so it’s really fulfilled that part of me that wanted to create those real epic wall of sound tunes that come from a band playing together rather than a songwriter.

Storytelling is really important in your work, and you have a particular interest in Classical literature. What draws you to Classical literature? How much do you interfere with the existing story and how do you decide what gets cut? What is your responsibility to the author?

It’s a bit of a blag really, using Greek myth, it’s a brilliant excuse for writing an extreme story. We did Medea first, which is ‘man cheats on woman and she kills their children in revenge’ I mean it’s just so extreme. And Oedipus is ‘son kills father not knowing it’s his father and son has sex with his mother not knowing it’s his mother’ and so you’ve got this really extreme but basic story points that everybody knows from this myth, but most people don’t know the intricacies of the stories, it’s mostly just these iconic story beats. It gives me this huge story skeleton and I can then rely on the limitations of that and, I’m probably a heathen, but I don’t feel any responsibility towards the original author’s idea, I feel like it’s more of an opportunity to honour the actors and what they’re bringing into the story. My Oedipus is very much influenced by the actors that I R&D with and their stories and how an audience will emphathise with their characters, so it’s very contemporary, it’s very much a more modern drama but with these key story beats.

Listening to that and your description of how you write with the band it sounds like you find limitations quite freeing?

Yeah I think it’s really hard to be creative sometimes. Especially as you get older its harder to carve out that freedom so I guess I do find it easier when I know exactly what the perimeters and are and then there’s freedom within that.

What do you hope an audience experiences through your music?

I like to think that there’s a connection with the female fury, there’s a lot of fury in the album. I think there’s a lot of freedom we can get by sharing fury delivered in music. I’m listening to an album on repeat at the moment by Fiona Apple, it’s her latest album, Fetch the Bolt Cutters, and she’s so pissed off and it’s so delicious to go there with her and sing along. And so just as I get to joy from Fiona Apple I’d love to think of people in their cars with the Oedipus album turned up to maximum volume, feeling all their rage, experiencing some kind of emotional release.

I don’t think it’s presented enough, I think the female voice in music full stop is fairly rare. I think there’s all of this social pressure to achieve and to be together and to self manage and to be good and so we create moments in theatre and music and in this album where it’s the big f*** off, saying this is me inside and I want to be released from all of the shackles and things that are anchoring me to be well managed. That’s what the character of Jocasta is, just raging against all of that, the story that people give you, the narrative that people place on you. So the opportunity to just scream that out, on the edge of the cliff, so you can find peace to then step back into the role you have to take back on in life, it is a necessary cathartic release.

What has your New Voices journey been like so far?

It’s been a complete blessing, to be held and supported as a musician, to be recognised as a composer, to be amongst a community of other boundary pushing and genre defining musicians. The mentoring has been invaluable and the constant contact with a dedicated Creative Project leader to chivvy me along has been really great.

Will you continue to adapt classical literature in your future work? What other stories are you keen to adapt?

I’m really not sure at the moment, I’m so utterly consumed by this show I feel like I’m mid-marathon. It’s taken two years from the first thought of what will be the next show to get to this point and it still feels like there’s quite a long trek to go to get it up and out and into the world. I think that especially with giving the album more time, because of the Sound and Music opportunity, and each of those songs having their own individual, independent story to tell, my plate is really full. For this year, especially with the pandemic, it’s been so much about investment into a future creative harvest and the harvest stills feels quite a long way off. Some day, hopefully in 2021, the show will be made and the album released and and we’ll be gigging and performing the theatre show. At that point we can see what takes and what doesn’t, what launches us into the next thing.

The band will perform an exclusive gig to a socially distanced audience at The Forum, Tunbridge Wells, which is set to be live streamed by hosts; Sound and Music, Luton Hat Factory, The Core at Corby Cube, The Old Market in Hove, Lakeside Theatre in Colchester and Pleasance Theatres in London.

You can find more information and book tickets here from January 15th.

Buy Pecho Mama’s new single ‘Back Against the Wall’