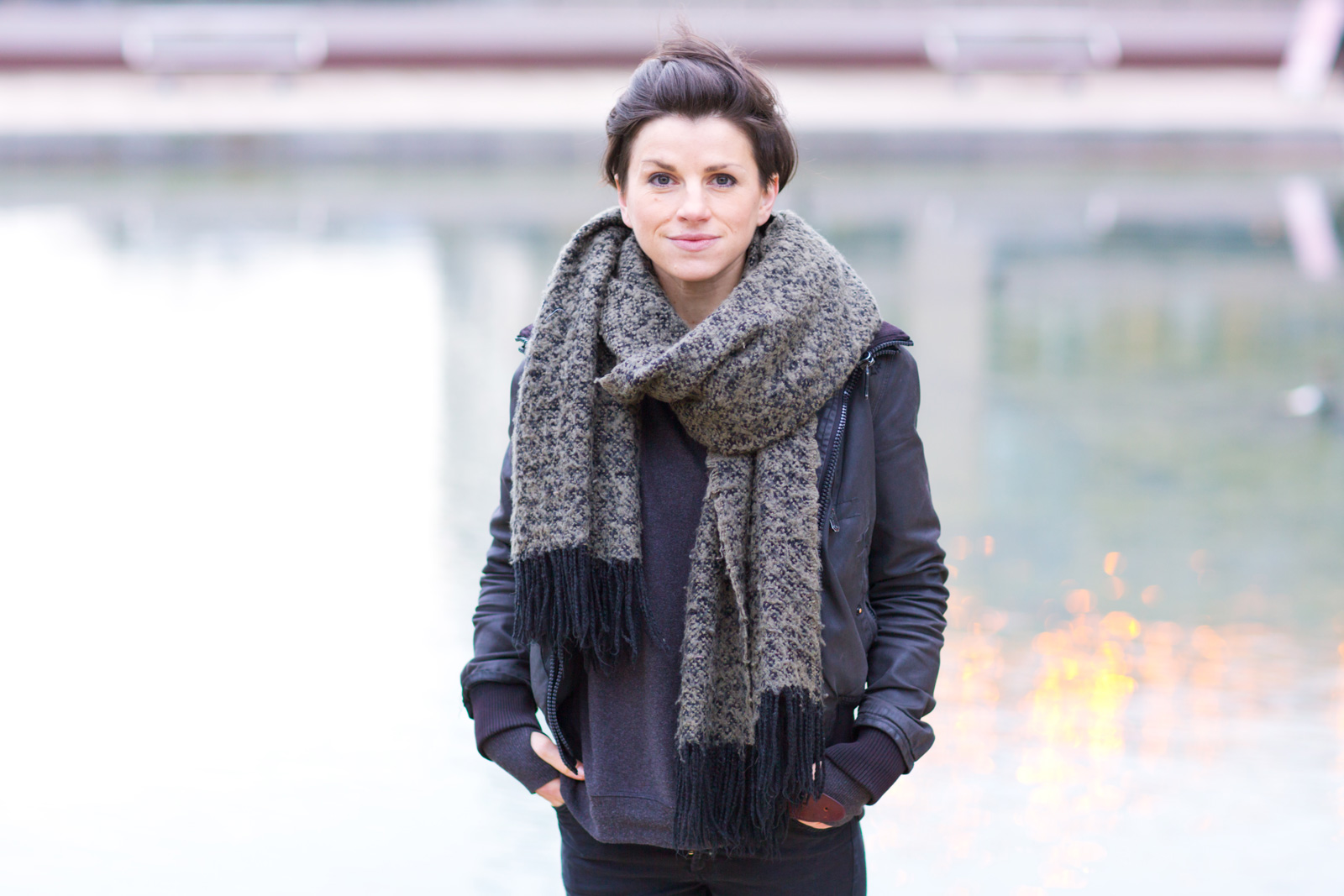 Emily Levy is a British singer and composer on Sound and Music’s New Voices 2019 programme, whose musical influences range from medieval to classical, folk to jazz. She works closely with the voice and sound design and is particularly interested in blurring boundaries between both stylistic genres and electro acoustic writing.

Created as part of the New Voices programme, Songs of Belonging is her new multi media work by that straddles concert, theatre and film. It combines recorded speech, an ensemble of singers and instrumentalists and integrated visuals by artist Magali Charrier. It explores themes of ‘home’ and ‘identity’ and how dramatic possibilities can open up when we find common language in contrasting lives.

As she prepares for the next stage of developing Songs of Belonging in workshops with Arts at the Old Fire Station, Oxford in May and on her Britten Pears Arts residency this August, we caught up with Emily to learn a little more about her inspiration and creative process.

You can also watch the video Emily made for Snape Malting’s Festival of New 2021 below.

What inspired you to explore the big themes of home, identity & belonging?

As a Southerner who’s lived in the North of England for more than half my life I’ve been aware, when I speak, of being identifiably different from my surroundings. Of course, this is a really tiny migration in global terms — but I think it means that I’ve been drawn to other people’s journeys and experiences of relocation, usually far bigger than my own.

I began to be interested in the difference between ‘where you’re from’ versus ‘where you belong’. I wanted to explore what a person who has never moved more than a few miles from their place of birth might share with someone who has travelled half way across the world, either by choice or necessity. This project has grown out of that interest, a way of talking to a really wide range of people —of different ages, nationalities, experiences— and trying to find points of overlap between all their stories. The crux of it is combining their voices with live music and visuals to create a dialogue between different art forms and story: an expanded conversation. This builds on previous work I’ve done integrating speech with music, and here I’m expanding it into a live/cross art form context.

I still definitely feel like a Southerner in the North, but over time I’ve also begun to feel like a bit of a Northerner in the South. I’ve begun to realise that, rather than a coincidence, perhaps this is a sub-conscious preference. Maybe I’m actually most ‘at home’ when I feel slightly like an outsider. Songs of Belonging isn’t about me at all, it’s about other people’s stories, and I guess this is why I was drawn to these themes and wanted to understand them in more depth by listening to others.

An early phase of the project has involved developing interviews with a range of participants – were there any common themes and was there anything that surprised you?

One of the interviewees said, “I guess that sense of where you’re from only partly defines you.” I think that’s the core of what I’ve noticed from the conversations so far: the commonality of the push and pull of our first sense of home, and then how that idea is shaped by our experiences, loves, losses. It’s been interesting thinking about whether ‘home’ is something you refer back to as you age, or if it’s something you have to redefine, recreate and strive for.

I guess what has surprised me is the eloquence of what I’ve heard, the poetry in it, how the way people talk tells you as much as the words they say. This is all obvious stuff, but to hear it in the context of our conversations has been a great privilege.

With the possibility of intensely personal subject matter you made an early decision to avoid literal video representation of those you’ve interviewed. Can you tell us more about your approach here?

I knew that filming would definitely not be OK for some of the people I wanted to speak to, that they would want or need to remain anonymous. I also had the feeling that, even for those who didn’t mind being seen, the extra dimension of filming might remove some of the intimacy from the conversation. It was really important to me that the interaction felt as natural as possible — my aim was to create the right conditions for one of those really engaged, fully attentive 1:1 conversations that can happen every now and then, the kind that feels very distinct from small talk or everyday chat. As it turned out, due to Covid, many of the interviews took place via Zoom, about as far as you can get from the ‘natural’ environment I’d imagined!

This is where the work of Magali Charrier, the visual artist, comes in. She’s based in Belgium and is really experienced in working in a live context as well as digital, film and on paper, so her skillset was a perfect fit. All our work together has been remote so far: developing a common pool of influences, inspiration and responses to the theme. Together we’re exploring ways to represent the interviewees that isn’t too literal. Instead of filmed headshots of the interviewees, we have to find creative ways of visually representing them that is more integrated with the musicians on stage. We’re in the early days of developing this together, and I hope this is one of those restrictions that will lead to an exciting solution.

You’re working closely with theatremaker, director and musician Mella Faye (also on the New Voices 2019 programme) to develop a narrative thread from individuals’ disparate experiences. Can you share a bit about the process here?

There’s plenty of common language between us, in that we’re both musicians who combine performing, composing and collaborating. Mella also brings a whole wealth of experience in theatre, storytelling and narrative that is new territory for me.

Our work began with me transcribing the interviews, and then together we worked through these in written form, drawing out themes, overlapping storylines, connections and differences. Mella whittled these down and gave them a narrative framework, a sense of story and development. I edited the audio to fit this ‘script’ so that we now have a sonic web of different voices and ideas. It’s been really interesting to compare what works on paper and what works in audio — some things that look a bit pedestrian on the page are then really lyrical when you hear them spoken, and vice versa. Beyond the words, there’s another whole level of communication: the various accents of the interviewees, laughter, vocal idiosyncrasies, moments of powerful silence etc.

One of the main things I’m learning from working with Mella is her ability to step back and think things through from an audience’s perspective, how it is to experience the work for the first time. This is something I’m always thinking about from a musical perspective, but it requires a different type of listening when you extend that into all the other dimensions of a more ‘staged’ work.

What do you hope an audience might take away from experiencing a work of this nature?

I hope that the audience will be drawn into the characters and their stories — and that what they see and hear will resonate with them. The combination of speech, live music and visual material create an immersive and expansive experience that offers both escape and connection.  Audience and participant feedback is a really important part of the process, so the answers to structured questions along the way will really help us understand how the work is coming across.

This project is being made in the context of Covid, Brexit, and other forces for change, upheaval and transformation, so this will inevitably be a factor in its development.  But it’s also as much about unchanging human themes — growing up, identity and community — so this will be just as important, and allow space for much needed moments of levity and playfulness also.

You are currently working towards a residency at Snape Maltings during which you hope to develop a short film of Songs of Belonging. What comes next for the project – how do you hope to take this forward from that point?

Yes, following initial music rehearsals at the Old Fire Station in Oxford, the Snape residency week will be the first time the whole creative team is able to get together and develop both the work and a sense of ensemble. This would be a luxury at any point, but given the context of the last year it really is an amazing opportunity. The film we make at the end of that week will be both a representation of the work so far and a calling card for the next phase, which is to extend the piece into a longer filmed and staged work. I’m really keen to integrate more interviewees’ voices and stories into the piece, and to expand the role of these contributors so that they play an integral part in the devising and performance. I’ll also be looking to expand the team to include a director, choreographer, producer and an expanded ensemble of musicians.

I’m excited to see what comes of this new way of working and these new collaborations. It certainly feels like a good time to be exploring a more digital and visual way of working alongside live work.

Find out more about Emily Levy

Find out more about New Voices