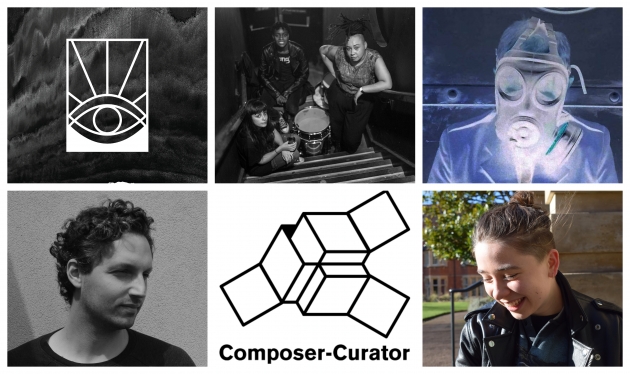 We’re thrilled to announce the five projects that have been selected to be a part of this year’s Composer-Curator programme. Each of the chosen artists will be supported to develop their public projects, focusing on bringing new music to new audiences across the UK.

This year’s projects span a truly unique and diverse range of people, places, genres and performance contexts. These include exploring immersive, queer safe-spaces in Birmingham, DIY electronic music workshops in rural Somerset, and a cross-artform festival of experimental music and Japanese haiku.

With the present situation surrounding COVID-19 and social distancing measures, we know that Composer-Curator’s usual focus on live touring events will have to shift. This will reflect the new limitations we all face in presenting work to audiences, but also the exciting opportunities now emerging in digital spaces for arts engagement.

Given this context, we’re really excited by some of the creative propositions these artists, composers and creators have considered to reframe their original plans, maximise their digital impact and experiment with new approaches. We are also delighted to be able to continue to support these projects as originally planned.

Composer-Curator will always be our touring programme and we look forward to seeing what these digital tours might look, sound and feel like. This year we’re also excited to be working with Supersonic Festival‘s Lisa Meyer, who will be on hand as an expert mentor to provide additional support.

You can get an overview of the selected projects below, or learn more about them in their individual Q&A’s.

You can find out more about our Composer-Curator programme here

Stephen is a sound artist, audio producer and curator, having worked internationally on projects for film, live performances, music releases and exhibitions. He creates unique hand-built instruments, combining found objects and bespoke electronic-circuits. Focusing on discarded and redundant objects (‘make-do and mend’ ), as well as working with technology and collaboration. He has developed numerous audio electronic kits and regularly delivers workshops at festivals, art spaces and educational establishments.

His project will focus on his Chaotic Behaviour event series, which bring together different groups of musicians, makers, artists and young people to develop their interest and skills in DIY electronic music. It will take place in Somerset, a rural area with dispersed artistic communities that lacks a cultural infrastructure to allow new music to develop and flourish.

Learn more about Stephen’s project in his Q&A

Rufus Isabel Elliot is a trans musician originally from Tower Hamlets, now based in Glasgow, who has written everything from funerary music for doomed spaceships to orchestral music about rotting seaweed. In 2019, Rufus was composer-in-residence with Scotland’s street orchestra, the Nevis Ensemble, creating a new work for their summer tour of the Outer Hebrides. Current projects include a new recording project with violinist Harry Gorski-Brown, and a remix of Fergus Hall’s Shores.

Rufus’ Composer-Curator project will centre on its OVER/AT series, which creates a platform for trans and non-binary folks to speak for, with and by themselves, rather than through the eyes of the cisgender arts and media.

Learn more about Rufus’ project in its Q&A

Naviar Records is a music community and record label: through regular publications, open projects and events, they explore the connection between experimental electronic music and traditional Japanese poetry. Since its inception in 2014, Naviar’s aim has been to offer an engaging online space to all those artists looking for ways to stay creative. To this day, Naviar is home for more than a hundred musicians worldwide. Naviar’s founder, Marco Sebastiano Alessi, is an Italian-born ambient-electronic composer who makes music under the moniker Cryxuss. Before discovering his passion for electronic music and starting Naviar Records, Marco played the drums in various bands in Italy and the UK. He hosts the weekly radio show Naviar Broadcast on Resonance Extra and writes the Haiku Music column on the Haiku Foundation.

Their project, The Naviar Haiku Fest, is a cross-artform day of workshops, talks and live performances focused on experimental music and haiku, exploring how these two art forms can influence and inspire each other.

Read more about Naviar Records’ project in their Q&A

QUE.E.F is a brand-new Birmingham based experimental live music and art night: an immersive safe space for queer parties, collaboration, drag, activism and live performance. Showcasing experimental live music and art by queer artists from around the country and beyond, these self-described “techno loving, disco pumping, trashy queer punks” embody the motto “better out than in.”

The core QUE.E.F team is made up of Meesha Fones (Director) Anna Palmer (Producer) and Kaila Whyte (Producer). These three long-time friends and musical collaborators from Birmingham hold an in-depth knowledge on both the local and wider national underground music scene, having toured the UK in various musical outfits (Dorcha, Youth Man), including their alt-rock, synth-noise trio ‘Pretty Grim’.

QUE.E.F hold a great deal of collective experience in curating events, tour managing and engaging with the arts. The trio strongly believe in the bond between queerness and experimental music, something they will bring to the fore as part of Composer-Curator.

Read more about QUE.E.F’s project in their Q&A

Born out of the natural spaces bordering the Lake District and nurtured in the creative landscape of Manchester, First Light Records is not constrained by genre or scene.

A product of its environment, First Light is informed by an ongoing interest in the meeting of ideas around nature and heritage with the future-facing elements of electronic music and contemporary visual art.

Having known each other at secondary school and then moving to Manchester to study, Rob and Liam established First Light Records in 2017 to reflect their shared love of electronic music and aesthetic tastes.

Their project ‘Third Space’ will be an immersive installation combining film, field recordings and live electronics, encouraging audiences to re-examine their ideals around climate change, art and technology.

Read more about First Light Records’ project in their Q&A