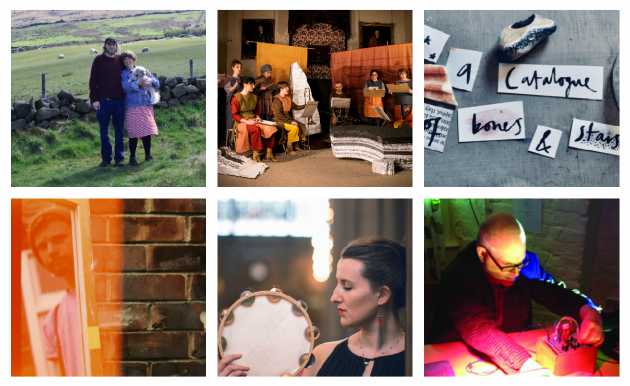 We’re excited to announce the six projects selected for this year’s Composer-Curator programme. Each of them will be supported for the next nine months in developing public programmes that focus on new music, sound and the world around us.

This year’s projects span a truly diverse range of people, places, genres and performance contexts: from outdoor immersive opera in the Scottish highlands to improvisations drawing on the sonic archives of rural mid-Wales. Topics explored include algorithms, site-responsiveness, sonic ecology and notions of community.

You can find out more about the projects below.

Unland will draw together composers and participants to make new sound performances based around the psychogeographic memory of rural mid-Wales. It will utilise sound archives held in the National Library of Wales, including oral recordings of forest workers and community singing festivals (eisteddfodau) from the 1970s, which will provide the tangible material and stimulus that will be re-presented and re-worked. Participants will take part in workshops to explore sound interpretation, composition and improvisation leading to performances and public talks about sound, memory and place, at venues including the National Library of Wales and Ceredigion Museum.

Dr Dafydd Roberts has made music as Our glassie Azoth since 1993.  His music has been played by John Peel, Adam Walton (BBC) and Ed Pinsent (Resonance FM).  The Wire describes Our glassie Azoth  as “Emerging at some distant extreme of experimentation…Weird, wonderful alchemy” (Tom Ridge, The Wire). Most recently he has collaborated with Toshimaru Nakamura to devise an object score deriving from Japanese ceramics. A full length CD is released imminently via his imprint with Nakamura, Rhodri Davies and Roberts performing at Nakamura’s debut in Wales at Listen to the Voice of Fire March 2018.

More than just a live music event, AlgoRhythms also features a live discussion panel to encourage audience participation and interaction with the music and the project’s themes, taking it beyond standard concert formats. 21st Century ideas for 21st Century people.

AMOK is an experimental performance platform based in York. AMOK showcases experimental performances by emerging and established composers and performers based locally and across the U.K. AMOK aims to foreground York’s cultural identity by utlising different venues from historic, vibrant and culturally significant spaces.Previous events have included performances by Trevor Wishart, OUT-TAKE Ensemble and Morag Galloway.

AMOK will commission Neil Luck, Catherine Robson and Lynette Quek, to write new works designed for three different venues, including a Georgian Kitchen. The concerts aim to engage and inspire a variety of audiences and generate life into these hidden venues in late 2019.

As a performer, James has worked with several composers including: Neil Luck, Aaron Moorehouse, Tom Sissons, Rodrigo Constanzo and Oogoo Maia. James has performed with the Ulster Youth Orchestra, The Assembled, University of York Symphony and Chamber Orchestras, squib-box and Ish. James was Chair of The Chimera Ensemble between 2017-18 and is the founder and director of AMOK.

Lucie Treacher / A Catalogue of Bones and Stars

“A Catalogue of Bones and Stars” is a new outdoor immersive theatre adventure with music, based on the lives of two ground-breaking female scientists: the pioneering astronomer, Caroline Herschel and palaeontologist, Mary Anning. One looking up to the sky, one down to earth, both these women bravely delved into the scientific unknown. The show will bind theatre with music, using distinct sonic ideas from the rhythm of a pick-axe to the movement of stars in the sky. It will be performed on beaches across the Highlands and each performance will include a community beach-clean as well as workshops with literacy learners.

Based between the UK and the moon, Lucie Treacher is a 24 year old sound artist/composer and performer and creator and director of the International Archive of Dreams. Her work is characterised by vivid and highly textural sound worlds, which are playfully woven into her multi-disciplinary work, merging theatre, performance, film and community arts. As a sound artist Lucie has been involved in a spectrum of projects, taking her from experimental, improvisatory realms to electronic music and to opera, creating work for Kings Place, the Saatchi Gallery, Cadogan Hall and subterranean caves.

We will collaborate with a group of inspiring contemporary performers and practitioners to produce an interdisciplinary work, Five Verses on Six Sacks of Earth. This project develops three overlapping versions of the piece in performance, film and audio. Developed during a residency on an archeological dig, we use a layered approach including text, field recordings, composition, improvisation and design to think speculatively about archeology. Using a model exemplified by artists like Maria Fusco, we will explore making work that is both intensely place-specific but exists in different forms and engages audiences with different access, interests and backgrounds.

Rebecca Lee is a musician and composer producing research-led audio installations and compositions alongside experimental performance projects. She regularly works off-site, engaging with feminist thinking around landscape, community, knowledge and sound. Recent commissions include Radar, Nottingham Contemporary and the National Trust. As Bredbedle, she released Stackes in 2017, picked as The Quietus’ top 10 tapes for that year.

Nastassja Simensky is an artist based in Nottingham and Fine Art Lecturer at Nottingham Trent University. She often works with non-artist collaborators and her interdisciplinary practice is embedded in specific geographies where social, natural and technological territories have become part of an increasingly entangled ecology.

We are keen to programme a concert series that is very pro-Europe in the wake of the referendum to leave the EU, as a rejection of the vote and as a statement to show how important it is for the UK to have ties to the rest of Europe for inspiration, creative growth and opportunity. With support from Sound and Music we are able to invite musicians using traditional European instruments to Todmorden to demonstrate their practice at two local primary schools and also perform in the evening to an audience at The Golden Lion Hotel. We will also be funding new collaborative projects at our annual festival Tor Festival.

“Tor” is an umbrella term used by illustrator Jake Blanchard and musician Sophie Cooper for a variety of projects including Tor Bookings, Tor Festival, Tor Press, Tor Beers and Tor FM. Based in Todmorden, Jake and Sophie have been programming events in Todmorden, West Yorkshire, since moving there in 2013. They are very interested in experimental music production, new music and how Tor is placed in relationship to the local area, the rest of the UK DIY music scene and the wider international experimental music community which they feel very passionately about and personally involved in.

Learn more about the Composer-Curator programme