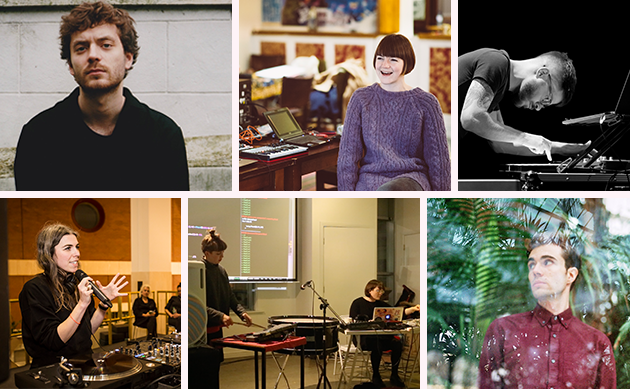 We are delighted to announce six projects selected for our 2018/19 Composer-Curator programme. Running since 2013, the initiative supports composers in staging projects that set the sonic agenda, shaping the future of new music across the UK and building sustainable networks for its creators.

This year’s cohort is a kaleidoscope of where new music finds itself today: from new commissions exploring issues of preservation and marginality, to unheard and transcribed work from the BBC Radiophonic Workshop; and from workshops reflecting on gender, music and digital technology, to large ensemble collaborations across genre and idiom.

You can find out more about the projects below.

An assembly are a group dedicated to contemporary and experimental music, installation and performance. Conceived as a large, open, and flexible group with no fixed line up, format or personnel, An assembly have appeared in many guises, tackling works from virtuosic ensemble scores to mass group readings, via text scores, graphic notation, long duration performances, one-on-one ASMR installations, physical performance, and wrestling.

You will be touring the project in different venues. Who are you hoping to reach with this work?

Audiences from across the new music spectrum, alongside those interested in the large contemporary cultural sphere who may be curious to experience new music and performance based work.

Having the chance to work closely with three fascinating young artists and perform the pieces in three different concerts, allowing us to really delve into each work and perfect their realisation.

Daniel Thorne is a composer and saxophonist, who is fascinated by the infinite shades of possibility that exist between the notions of acoustic and electronic, and composition and improvisation. This blurring of lines is at the heart of his music, creating a unique sonic world that obscures and detaches his instrument’s sound from its more-typical associations.

So many things! We are working with some incredible artists, and performing in spaces that we have not performed in before, and I’m excited to try and step up the presentation of our concerts. I’m also excited about having the opportunity to compose some additional music for each concert, as I have never written anything for the ensemble that hasn’t been collaborative in some way.

How would you describe this area (for new music)?

Liverpool does not have a specific ‘new music’ scene in the way that somewhere like London does. That said, there are people making incredible new music in the city, across a range of styles/genres, and on the whole I’ve found that audiences are willing to take a punt on something different and new.

Ella Finer // Live at the Lighthouse

Ella Finer’s work in sound and performance spans writing, composing and curating with a particular interest in how women’s voices take up space; how bodies acoustically disrupt, challenge or change the order of who is allowed to occupy “ command “ space.

The series will host three extraordinary composers – Laura Cannell, Vanessa (VV) Brown and Larry Achiampong – re-mixing, re-composing, re-interpreting Longplayer’s (longplayer.org) score and music over three consecutive nights in October 2018. Inspired (as a trustee, a daughter, a custodian) by Longplayer’s ethos of caring for the long term alongside her own work as a composer-curator interested in re-mix, cross-temporal splicing and the politics of doing so, Ella Finer’s starting point for these sessions is to ask how sound legacies are produced and who creates them? Further who ensures their “preservation” and how? Who knows where to look for these legacies–who feels entitled to creatively and critically attend to these materials?

_REMIX is ‘a space where classical music can be enjoyed in a relaxed environment’ [BBC 6 Music]. We’ve presented nights in partnership with the V&A, Royal Academy of Arts, Historic Royal Palaces, Dulwich Picture Gallery and others. _REMIX nights are ‘unusual and incredibly special’ [London in Stereo] ’bringing together the old and the new, the classic and the future classic, to emphasise their similarities and pick up on their differences.’

You will be touring the project in different venues. Who are you hoping to reach with this work?

We’ll launch the night in London before touring to venues throughout the U.K. The composers featured have a growing following, and we hope to offer this audience new perspectives on their work as well as exciting new audiences as to how innovative, exciting and impactful this music is.

Working with Jo Thomas (and Roland) will mean time experimenting on a bunch of really awesome instruments. I’m excited to see how the historic music featured works on both old and new synthesisers, and to put that incredible sound through some gigantic sound-systems!

Joanne Armitage is a creative technologist and artist working with sound, physical computing, digital media and interaction design. She is known as a laptop performer – working with code as a performative medium to control uncertain electronic sounds and complex textures that are (otherwise) challenging to realise live.http://joannnne.github.io/

Greta Eacott is a composer and percussionist, working primarily with live acoustic performance. Her practice explores the use of space/s as musical material – and her compositions are characterised by experimental approaches to rhythm, choreography and spatialisation. www.gretaeacott.com

Our project will involve running workshops that transport participants from familiar spaces to somewhere more exciting and exploratory. Through this we hope to reveal *something* about our practices and share our ways of working.

How would you describe this area(for new music)?

There are pockets of interest in new music around Yorkshire mainly concentrated around cities and larger towns.

SONA is a Sheffield-based group which fosters skills, creates space, generates networks, and forges collaboration to support women in learning and experimenting with sound and music practices.

Supporting women in sound and music technology through community building and encouraging experimentation.

Where is your work being performed?

At DINA in Sheffield

How would you describe this area(for new music)?

There is an amazing and vibrant music scene in Sheffield, but there can sometimes be a lack of cohesion. We’re hoping to make connections with lots of difference scenes as part of our project!

Learn more about the Composer-Curator programme