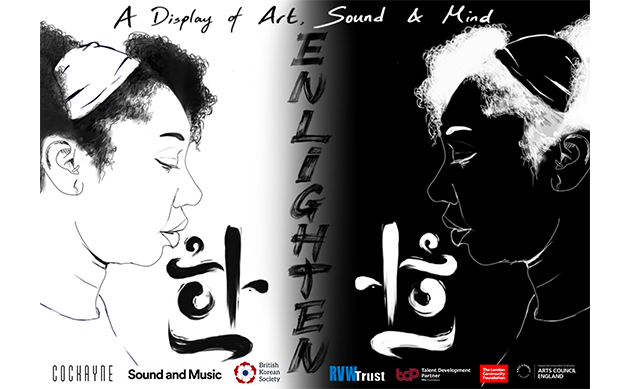 Damilola Eniola (Gugak Sounds) is a composer and performer who plays the Janggu and Gayageum. Inspired by Korean and Western traditions, Dami looks for dynamic ways of mixing the music of various cultures in her compositional work.

Dami was selected for Sound and Music’s artist development programme, New Voices, in 2018. As she approaches the final stages of creating her piece, we were interested to find out how being on New Voices had shaped her creative practice and thinking.

We got together to discuss how her project, Enlightened, has developed over the past year, and if her time on New Voices has impacted her approach to creating work.

Can you tell me a bit about your New Voices project?

It’s called Enlightened – Han. The reason that I called it Enlightened was because I’m using this project as an opportunity to express my inner thoughts, which I rarely share with people. I want them to take a look into my world and for them to see what I see. Because I’ve noticed that if you don’t talk about things people don’t realise that people have the same thoughts. So I want them to share with me the experiences and go ‘oh so I’m normal, it’s normal to have those thoughts, someone else has them’.

The word Han is a Korean word that Koreans associate with a feeling, a sentiment. Their emotional reaction to a situation. Han is the actual feeling, so when someone feels betrayed by something they will say I feel the Han for that. Whilst I was in Korea studying, I got to fully understand what that word meant. I went through so many emotions, from highs to lows, to successes and failures. And through this process, I now fully understand the meaning of Han.

I’ve always thought that, even before going to Korea, that every person has Han in them. I don’t believe the expression of that word is felt only by Koreans, it’s felt by every single human being. So I’m trying to break that mould. I’m trying to say ‘yes I do have Han, I have experienced it and this is what it means to me’.

What form will the project take?

There’s going to be an exhibition, combining both visual artwork and sound. There will be electronic music representing each artwork that people can listen to at the exhibition or online. At the private view, I will have a live performance where my composition will be performed in full. The composition is written for percussion, cello, yangqin, daegeum and geoumungo. This will be at the Menier Gallery in December. It will be running for a week.

I am also using QR codes where people can follow links and listen to the music as well, so people who don’t make it to the opening night still get the opportunity to gain that experience online.

Why have you decided to use visual art and music to explore this?

Sometimes I feel that sound is limited, and if you visually see something you can have a better understanding of what’s going on in someone’s mind. On many occasions, I’ve been to a concert and people have said ‘this is what I’m trying to express’, and I’m like ‘but I don’t understand’. I think that having something visual to accompany the music helps to show where I’m coming from.

So is communication really important to you?

Yes, it’s very important to me. I use artworks and music together because I think these two mediums can stir emotions in people in a different way. I’m using music with each artwork to express these complex emotions and I hope that people will be able to understand better. So it’s like another way of communicating.

Do you hope you’ll attract a Korean and British audience to your exhibition?

I hope to attract not just British and Korean audiences but everyone. Because I don’t believe these feelings are just experienced by a certain type of people, I believe that it’s worldwide. And like I said from the very beginning, everyone goes through these feelings, feelings do not consider race.

How much has the idea for your project changed since you started the New Voices programme?

Wow, it’s changed quite a lot. At the beginning, I didn’t have a solid plan for what the project would be. But I wanted to collaborate with a visual artist.

But when the artist brought ideas and things to me I felt no connection to them and I was thinking to myself – how am I going to write music based on what I don’t connect to?

So, I thought, OK, why don’t I give it a try? I’ve always been interested in the art world, I studied art as well, so it was an opportunity to bring my wider knowledge and my feelings to life, which is very important to me. For me as a composer its always been important that whatever my music represents I have to have a connection with it. So, moving on I tried to secure another artist, who could explain how I felt better. But funnily enough, it was the first artist who said to me ‘why don’t you just do it yourself? You don’t need me, you have a better way of explaining this thing yourself.’

Was this a hard choice to make?

It’s been hard, yes, and it’s been an interesting choice because it’s kind of like letting go of a lot of things and breaking chains. Most of the people I’ve worked with in the past have been very close to me, in one way or the other, and to have to go to them ‘no’ has been very difficult – in a professional context, that is. I’ve come to realise that for me to actually develop myself as a person and to become a better musician I need to understand that there are just some things you need to let go of and make your own choices. So it was very hard.

And do you think you’ve changed as a composer because of this?

I’ve changed extremely in the sense that I’ve become much bolder. Before, when I was making a step I asked a lot of people for their opinions. But I realised that, whilst I was working on this project, that what I want to do has to be number one. It’s not what someone says I should do; that doesn’t feel natural to me as a person. And so it’s been a huge learning process for me, just being able to stand on my own two feet.

I do still feel scared because I think ‘what if everything falls down! Like a pack of cards.’ I’ve been walking around saying I’m this strong person and then everything falls down. But then, I think, I’d rather have it that way than following other people’s opinions, if that makes sense? At least then I know I did it. I caused my own downfall, I should be proud of it!

Do you think the New Voices programme has helped you in this process?

Yes, it has helped me, because it’s made me realise what I want to work in and the type of music I want to be making. It’s also helped me to be able to stand on my own as a composer without having to rely on a lot of things. Especially the financial aspect. Because I’m being supported, I’m able to make very fair and straightforward decisions and it’s really helped a lot.

Because of that support, it’s helped me discover myself as a person as well, because when you don’t have that much burden you can focus on what you really want. It’s made me become really assertive, but I’m still scared.

What will be your next steps after New Voices?

After working on this I feel that I really want to move forward and still work between art and music. I would like to continue in this field. My main dream since I was little was to write for film. The relationship between sound and image really interests me, so I would like to explore that more.

At Sound and Music, we strive to support composers from all walks of life to realise their potential, and enable them to create high-quality, ambitious work. As a charity, we need your help to support more fantastic composers like Damilola up and down the country.

If you feel passionate about the new music of tomorrow, please visit our Support page and consider supporting us today.