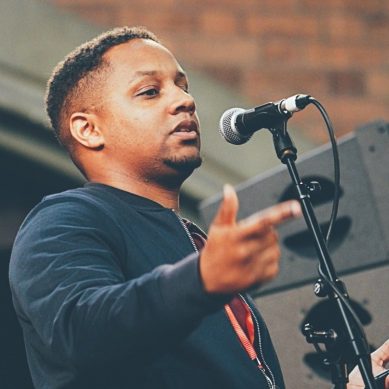 The George Butterworth Award is awarded annually to a UK-based composer, for an outstanding new work created through one of Sound and Music’s artist development programmes. We’re delighted to announce that this year’s winner of the £1,500 award is Blasio Kavuma, for his work Spirit Level. Listen to the work here.

Created as part of our Pathways Programme, the piece asks “Can music and dance take us beyond the physical, and help us understand what connects us as humans?” In this unique collaboration merging street and contemporary dance, the sound-world of Olivier Messiaen, the pianism of black gospel and the rhythmic devices of African traditional music, Kavuma and choreographer Si Rawlinson team up to explore these questions.

Watch our interview with Blasio – which explores the piece in greater detail, as well as the importance of awards and grants for contemporary composers – below:

Blasio Kavuma is a composer, arranger and curator based in London. He studied at Bristol University under Michael Ellison, receiving a MA in composition. He is now an active collaborator and curator over numerous platforms, including film, visual art and performance art. His work has been performed by ensembles and soloists in the U.K, U.S and Japan, and his music has featured on BBC Radio 3. His arrangements have been published by Zig-Zag education.

Drawing equally from classical and popular musical traditions, he has developed a sound-world full of rhythmic vitality and stylistic versatility and is committed to championing forward-thinking music that is accessible to a wide audience.

Blasio is currently involved with the Voice(ed) project in Chicago, a project documenting the work of composers of African descent, where he was commissioned a new work for voice, harp and percussion. Blasio’s piece ‘Continuo’ for violin and piano was recently featured on BBC Radio 3’s ‘Introducing’ initiative, designed to introduce composers to wider audiences.

If you’d like to support Sound and Music’s work to champion new music and the work of all British composers and creators you can do so here.