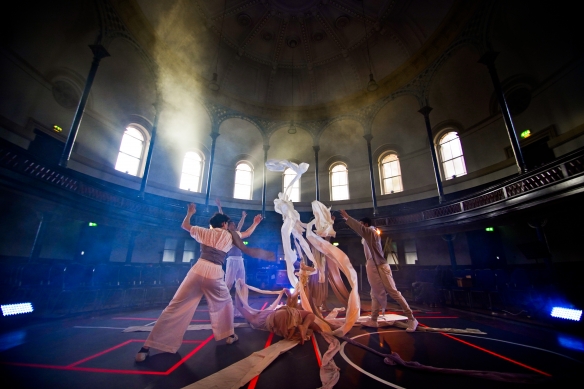 The George Butterworth Award is awarded annually to a UK-based composer, for an outstanding new work created through one of Sound and Music’s Artist Development Programmes. We’re delighted to announce that this year’s winner of the £1,500 award is Alex Ho, for his work ‘Untold’. We spoke with Alex about his award-winning project.

Tell us about your work, ‘Untold’ – how did it come about, what was the creative process like?

‘Untold’ is a 45-minute long stage work exploring British-Chinese identity through music and movement. Created for, and with, creative director/dancer Julia Cheng, counter-tenor Keith Pun, and artist collective Tangram. The piece hopes to show the richness and heterogeneity of Chinese transnational experience, demonstrating how it can reinvent musical genres such as opera whilst also shedding light on how Chinese diaspora navigate the complex cultural spaces in diverse and unique ways.

It was hugely empowering to work with a full group of Asian artists, something that was a first experience for everyone, and I wanted the project to reflect our own stories as people as well as artists. As such, the creative process was highly collaborative, from having each section of the piece framed by a personal story told by the performers to co-directing with the brilliant Julia Cheng, using improvised sections of movement from Julia and percussion from Beibei Wang to working closely with Reylon Yount, who beyond playing the yangqin, also performed Wu Shu (Chinese martial arts), and finally from refining vocal techniques directly with counter-tenor Keith Pun to having flautist Daniel Shao strike epic poses with a Chinese cymbal.‘Untold’ was, without doubt, the most rewarding creative project I have worked on. It was my largest piece to date and allowed me to understand further the endless possibilities of interdisciplinary and intercultural art forms.

Receiving the George Butterworth Award is a really special moment, not least because within the context of the shocking amount of racism towards Chinese communities catalysed by Covid-19, it brings a touch of optimism that it is possible to present different narratives of what it can mean to be of Chinese heritage today. It is also lovely to share this recognition with all the artists who contributed so significantly to this piece through their hard work, patience, and skill. The process definitely had some pretty stressful moments, including the plan of putting the whole thing together in little over a week, so I’m glad that it seems it was all worth it!

How did being on the New Voices programme impact on the development of the work and on you as a composer?

My project simply would not have been possible without the New Voices programme. Perhaps most importantly, it allowed me to dream of, create, and realise a project that challenged me in so many new ways. After writing quite a fanciful application, it was pretty terrifying when I found out it had been accepted and subsequently realising I had no clue where to begin. However, through the generous amounts of professional, production, and creative support, the project eventually took shape after eighteen months of planning and procrastination. I couldn’t have been more pleased with the outcome and I owe a huge deal of thanks to the various organisations and individuals who supported me over this time, including amongst others, Sound and Music, Snape Maltings, Help Musicians UK, Arts Council England, Second Movement, Fiona Allison, Huang Ruo, and Reylon. 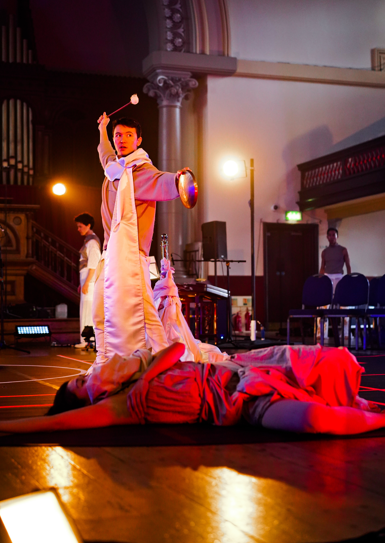 What’s next for you and for ‘Untold’?

We are excitingly planning to develop ‘Untold’ further and hope to present it in its new form in the next eighteen months (watch this space!). In the meantime, I am working on commissions for Royal Opera House, National Opera Studio, and a joint-commission from Music Theatre Wales and London Sinfonietta, whilst also continuing to hatch more Tangram projects with my partner-in-crime, Reylon Yount. Everything is, of course, a little up in the air right now but I’m just hugely grateful to be keeping busy.

It’s been heart-warming to see how in many ways, the present situation has brought people together in a communal sense if not physically, whether that be by clapping for our incredible NHS (special shout out to my two doctoring sisters!), by shopping for neighbours, or by making music together online. I hope these connections and acts of kindness outlive the virus as we each settle into new routines, and that we continue to support and cherish our communities during these strange times. Wishing you all good health and that we’ll see each other again soon!

Alex Ho is a Chinese-British composer based in London. One of the London Symphony Orchestra’s Soundhub composers, he has had his music performed/commissioned by the LSO, Shanghai Philharmonic Orchestra, Royal Opera House, National Opera Studio, Royal Academy of Dance, Ensemble Paramirabo, Juice Vocal Ensemble and Roderick Williams. Most recently, he has been commissioned for performances at SoundState Festival (Southbank Centre) and Sound Unbound (Barbican Centre), with further features at nonclassical and on BBC Late Junction. He is the co-director of Tangram, a new music collective catalysing transnational imagination and celebrating the vitality of Chinese cultures.Alex studied Music at Oxford University and graduated with first-class honours in 2016 before completing a master’s in composition at Cambridge University in 2017 where he was awarded the Arthur Bliss Prize in Composition for his final portfolio that attained the highest mark across the university. He is currently studying for a doctorate at the Royal College of Music with a full AHRC scholarship (LAHP Studentship supported by RCM). www.alexhocomposer.com