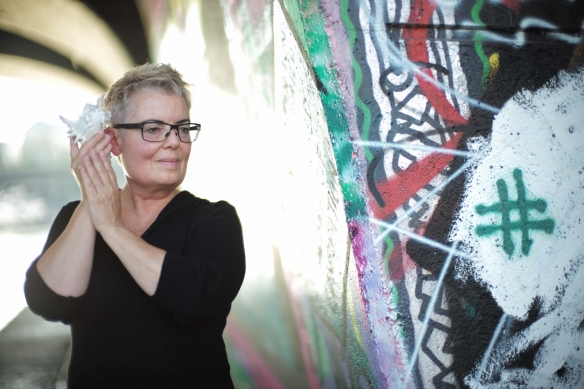 Congratulations to Pia Palme – the winner of the George Butterworth prize 2016!

The prize is awarded annually to the composer of an outstanding new work created through one of Sound and Music’s composer development programmes, which include Embedded, Portfolio and Adopt a Composer.

Pia was selected for ‘MORDACIOUS LIPS, TO DUST’, composed for her Portfolio project with EXAUDI – a work for four voices SATB which ‘brings together raging wrath and beautiful gentleness, in a process of compositional patterning’.

Pia Palme in conversation with Laurence Crane from Sound and Music on Vimeo.

How does it feel to be an award winner?

“I feel very happy and honoured, fantastic! It’s inspiring to see that one’s work is acknowledged. There is an interesting feature in this prize, too, which I like, the connection to Butterworth’s personal history is touching.”

Tell us some more about the piece.

“The work brings together raging wrath and beautiful gentleness, in a process of compositional patterning. The work was written to fit the ensemble and bring out their voices, and has two different parts. The first part exposes the soprano as a soloist, split into two contrasting voice-personalities: one is virtuosic, using the entire high range of Juliet Fraser’s singular voice, the other is composed of an intensely irate array of noisy productions and recitations.

The composition asks the soprano to constantly switch between these two vocal expressions, against a shifty microtonal background of male voices. In Part II, all four singers jointly perform a “microtonal partsong” ending with the whispered word “Staub” – German for dust. There is some existentialism here, and feminist criticism of the term “beauty” as well as a reference to today’s political situation dominated by wrathful activity worldwide.

Tell us a little more about the title – what does ‘mardocious’ mean?

“The adjective mordacious in the title makes reference to the fictional irate female voice permeating the composition. The baroque ornament mordent is frequently used in this piece, to enhance singular notes in the soprano part. I wanted to compose a quick and subtle aural accent, which might cause a momentary gap in the sonic flow, an aural twinkle that would cut, bite or sting through the mechanisms of listening to open up a glimpse of another dimension. The text for the soprano summons the thorns of a rose, shards of glass, or the penetrating power of love and madness to punctuate reality and skin, to unveil what lies underneath.”

What’s in store next?

“Right now, my focus is on writing up my thesis in composition. I reduce compositional projects for the moment – for me it’s the only way. Withdrawing and reflecting about work feels good, a chance to focus and sharpen my position. I expect that after closing this big project, a fresh approach will open up – the new is always less defined, which is exciting. I plan to do a new arrangement of an ensemble piece with electronics for May, with Austrian ensemble Schallfeld, a recording of a recent work with Ute Wassermann in Berlin, and right afterwards I start working on a short experimental opera, in Vienna. I look forward to expose voice in a radical way here. Later, there are plans for a more complex cartography for ensemble and voices. I can’t say more at this moment, there is new terrain ahead, which I want to keep open, for discovery.”

Pia Palme is a composer and sound artist. She exposes vocality in extended compositional and performance formats. In her method of political composing, she draws on installations, objects or electronic means to position her works into specific settings. She writes texts for her works, such as Patterns to punctuate sound, with darkness (2015 for Ute Wassermann) or MORDACIOUS LIPS, TO DUST (2015 for EXAUDI).

Interdisciplinary and collaborative projects are an important feature of her work, such as the radical opera ABSTRIAL. She was born in Vienna in 1957, studied music and mathematics and has also worked as an oboist, recorder-player, curator, producer, teacher and experimentalist.

In 2015, she was part of the Sound and Music portfolio project, recognized among the New Voices and received the Outstanding Artist Award of the Austrian Ministry of Art. Currently, she finishes her PhD in composition under Liza Lim, at the University of Huddersfield.

About The George Butterworth Prize:

The George Butterworth prize is a £1500 grant, which is awarded annually to the composer of an outstanding new work created through one of Sound and Music’semerging composer programmes, which include Embedded, Portfolio and Adopt a Composer.

The George Butterworth Memorial Fund was established in 1921 by the composer’s family together with initial trustees including Ralph Vaughan Williams and George Dyson. It was funded by income from the estate of the composer himself who was tragically killed on the Somme during the First World War, having been awarded the Military Cross.

To find out more about previous recipients of the award here

This prize is awarded in partnership with Making Music.

Find out more about the Exaudi Portfolio project!

Watch interviews with the four composers in residence here