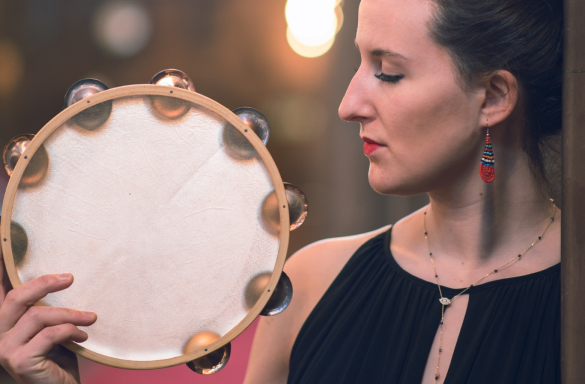 Delia Stevens is a percussionist, curator, composer and lecturer. She co-founded the Aurora Percussion Duo and world-music collective Kabantu. In 2019, Delia took part in the Composer- Curator programme and collaborated with composer Joe Snape to form the collective ConunDrums.

As a charity, we would not be able to deliver this unique opportunity for artists without the generous help of our supporters. We sat down with Delia to hear about her experience on the Composer-Curator programme, and how it shaped her professional development.

Did taking part in Composer–Curator alter your perspective on making a career out of composing?

Whilst I wouldn’t necessarily call myself a composer in a traditional way, Composer-Curator altered my way of thinking, and now I have the confidence to say that I am an artist, rather than just a  percussionist.

How would you describe your experience of Composer–Curator, in just a couple of sentences?

Composer–Curator is an excellent springboard to educate yourself, in order to make your idea more developed than it was in the first place. The programme is supportive in the sense that you’re allowed to admit what you can’t do in order to learn.

What did the programme teach you about composing that you perhaps hadn’t considered before?

I commissioned a composer with Joe Snape, but ended up writing lots of music myself, which I wasn’t expecting to do. This made me realise that I had more expertise than I thought, and that the strength of an initial idea can lead to more ideas. As I was thinking about what I wanted to say and do with the subject of technology, the ideas grew, and I felt compelled to write music in response.

Would you recommend Composer–Curator and if so, to whom?

I would definitely recommend it to artists who have their own ideas, want to change the landscape of the music industry and need someone to open the door for them.

Composer-Curator was a great stepping stone for future possibilities and collaborations, as once enrolled on the programme, we then attracted funding from the Help Musicians Fusion Fund, and £12,000 from the Arts Council. So suddenly the project budget went from £3000 to £21,000. Once you’ve gained support in the first place it’s much easier to attract further support and allow a project to grow, whereas when you start work with zero funds it is really difficult to begin. 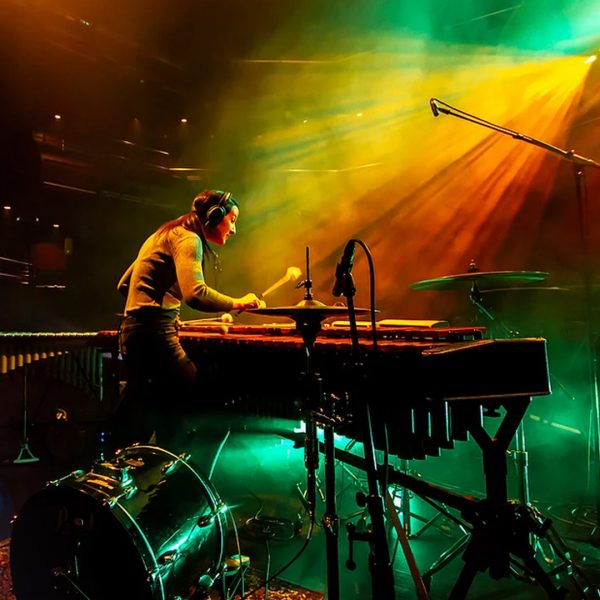 How has Composer–Curator helped you get to where you are now?

Composer-Curator provided a big injection of belief, understanding, credibility and financial support into the project, which allowed the work to grow and the project to become much bigger than it otherwise would have been.

Because Composer-Curator enabled me to attract more funding, I was able to get more people on board with the project. In the end, I ended up working with twenty different individuals! As a result, I am actually going to do a leadership course, as it made me realise that I had a skill gap and that I need to have better leadership skills, if I’m to work in teams and make the project ambitious. This is something that I maybe wouldn’t have considered otherwise.

Do you feel that as a result of Composer–Curator, your work has reached a wider audience or helped raise your profile as an artist?

Yes, definitely. It’s interesting that when I describe my project, which is about the ethics of technology, they often say ‘’wow, that’s completely up my street’’, and they just ‘get it.’ In this way the project is actually relevant to people, whereas if I said that I was doing a project about Mozart, not everybody would have an ‘in’ for Mozart.

This has led to lots of further conversations. For instance, I was involved with a debate with a Professor of Political Geography at Durham University, who has commissions from the European Research Council. Her recent research was informed by my own artistic project. We’re aiming to collaborate again soon and curate an exciting project with composer Óscar Escudero.

Leeds University also commissioned me to curate three concerts to celebrate the opening of their science building, in line with best science and music research. For this they’ve given me funding to commission three new composers or collaborators. This collaboration may not have happened without Composer-Curator.

Does your work speak to specific communities?

Yes – I made the concert because I wanted to create something that was really relevant.

For example, if I went to work with an orchestra, I would stand at the back and wear black and look formal. I would feel that this wasn’t ‘me’ or my artistry. So I wanted to deliberately curate something that was completely based on my world, rather than the traditional way that formal classical music is often presented in the concert hall. (Don’t get me wrong – I love orchestral music, but am not always a fan of the way it is presented formally.)

So, I took inspiration from a show by The Guilty Feminist, in which they held a live, interactive debate with the audience. I wanted to recreate this really cool, buzzy atmosphere. So when my project takes place live, I want it to include a live debate with the audience, with guest academics and industry speakers. I want the concert platform to be like a dialogue and to get people thinking.

We were played on BBC Radio Four with Evan Davis and he did like a feature about the show. There was a discussion around digital technologies, privacy and censorship. Adrian Chiles listened to this and played it on this show and we ended up having millions of listeners! It was amazing to attract people who are renowned for engaging in ‘hardcore’ conversations. Even some BAFTA winning filmmakers listened to the show and emailed me with praise, and I received lovely comments from composer Jacob TV.

Find out more about ConunDrums here

We need your help to continue supporting more composers like Delia. With your kind contributions, we can enable more artists to benefit from our opportunities like Composer-Curator.

If you feel passionate about the future of new music, then please consider supporting us today.  Just head here to find out more.