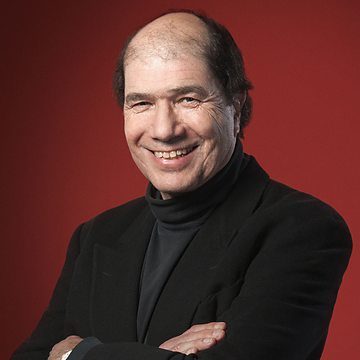 ‘It would be hard to think of a time when composers have been more in need of an organisation like Sound and Music. We have such a splendid cornucopia of compositional talent yet times have rarely been as hard or as confusing, especially for the emerging generation.

‘Sound and Music does a vital job of focussing and co-ordinating the promotion and representation of this most vivid and wonderful art form, one to which so many others arts aspire.’  – Michael Berkeley

Michael Berkeley was born in 1948, the eldest son of the composer Sir Lennox Berkeley and a godson of Benjamin Britten. As a chorister at Westminster Cathedral, singing naturally played an important part in his early education. He studied composition, singing, and piano at the Royal Academy of Music but it was not until his late twenties, when he went to study with Richard Rodney Bennett that Berkeley began to concentrate exclusively on composing.

In 1977 he was awarded the Guinness Prize for Composition; two years later he was appointed Associate Composer to the Scottish Chamber Orchestra. Since then Michael’s music has been played all over the globe and by some of the world’s finest musicians. Berkeley was later appointed Associate Composer to the BBC National Orchestra of Wales, during which he composed notable works such as Or Shall We Die?, Organ Concerto and Concerto for Orchestra.

Berkeley currently presents Radio 3’s Private Passions and was Chairman of the Governors of The Royal Ballet from 2003 to 2012.

Recent compositions include Magna Carta Te Deum, commissioned by Lincoln Cathedral to mark the 800th anniversary of the signing of the Magna Carta; a Violin Concerto for the BBC Proms, which will be premiered on 27th July 2016 by Chloe Hanslip, BBC National Orchestra of Wales, and Jac van Steen; and Haiku, a collection of miniatures for solo piano, which will be premiered at the 2016 Presteigne Festival.

Berkeley was appointed a CBE for services to music in 2012 and has been made an independent peer in the House of Lords.

Find out more about Michael